When WhoDaMan returned from work yesterday he was surprised to see Pike Electric Company trucks in the parking lot. They had driven non-stop from North Carolina to Victoria and were waiting for the storm to break before heading to the valley to help restore power.

There was row after row of truck that filled the parking lots of 2 motels. 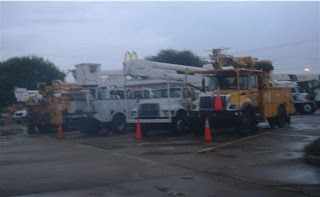 They even had 4-wheelers in the back of their 4 wheel drive super duties. 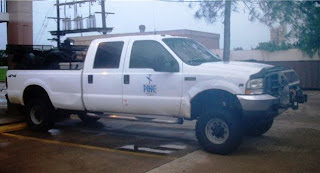 WhoDaMan express appreciation to the crew and bought a round of brews to show some appreciation from folks on the Redneck Riviera. 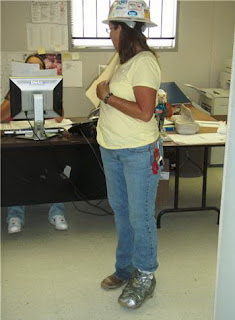 Another use was found for duct tape during the rain that we had. It makes a good weather proof covering for the broken foot of our safety lady. 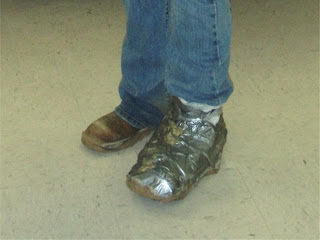 There will be more reports later as they happen of course.


That is all we know at this time.... this is your "WhoDaMan" reporter on the Redneck Riviera bringing you another almost live...with an autobalanced and resized digital color report.
Hawaiian shirts are everyday attire on the Redneck Riviera.
Become a Member Of The White Shrimper Boot Club
The Redneck Riviera a drinking community with a serious fishing problem
WhoDaMan now has the latest high definition chip for the GPS sonar combo and will be venturing to the inland lakes in order to balance my bodies PH from consuming so much saltwater fish over the years. Stay tune for some exciting freshwater action. Come on down when you get a chance while there are plenty of them biting.
This is WhoDaMan signing off.
Posted by Buddy Toepfer